Johann Jakob's childhood was not an easy one. Although his father was wealthy and influential, he was to lose his mother just 1 month after his birth and become a half-orphan. His father had completed his military career with the rank of colonel and so was able to take good care of the newborn, but he could not replace his mother.

4 years later his father married Anna Margaretha Grass, daughter of the wealthy decan and professor Johann Bartholomäus Grass. She was now to be his stepmother for a few years. His father Sebastian von Köhl successfully pursued his career as a civil servant: guild master, head guild master, and in 1832 he was elected councilor for the first time.

In 1835, Johann Jakob was now 10 years old, his stepmother Anna Margaretha died. Again, his grandparents probably stepped in and took care of the child. When his father remarried, Johann Jakob was already 13 years old. His new stepmother was just 8 years older than him and gave birth to her first child shortly after the wedding. Other half-brothers were added which was certainly not an easy constellation.

Johann Jakob probably attended a private school or boarding school, as was customary in wealthy families at the time. Thus, the father could concentrate on his career and his stepmother could take care of the offspring. In 1846 he was then mentioned in the marticle of the Protestant cantonal school, with the note: "resigned in July 1846".[81]

Johann Jakob caused his father great concern at an early age. He seems to have regularly drunk too much and become conspicuous. The situation seemed to escalate to such an extent that in 1849 the city of Chur placed Johann Jakob under a guardian. Johann Jakob's appeal was rejected. Dr. J. M. Rascher now took over responsibility and presented his recommendations to the guardianship authority. The authority then decided on the further course of action, issued orders and accepted the bills.

At the end of October 1850, the following was published in the official gazette of the Canton of Graubünden: "According to the decision of the competent authority of the council with the addition of the court of 23 this, the bailiwick has been recognized over Mr. Joh. Jak. Köhl, majorenner son of the city bailiff Seb. Köhl, and Mr. M. Rascher has been appointed as bailiff of the same. Therefore, everyone is warned to get involved in any transactions of interest with the aforementioned bailiff from now on without the prior knowledge and approval of his bailiff, as such transactions will be declared invalid in advance".

In 1852, Johann Jakob was cared for in a reformatory after another relapse. Johann Jakob was placed in reformatories several times in the following years. Before 1856 he escaped from the reformatory Wattwyl near St. Gallen and fled to Naples. There he enlisted for 10 years as a soldier with the Swiss troops in Neapolitan service. But even in Naples his drunkenness seemed to worsen to such an extent that he was threatened with severe punishment. His father bought him out of his contract and offered to finance his departure to the USA. Johann Jakob decided to return to Chur and lived in his father's house after his return.

Soon, however, he began drinking again. Conditions became so bad that his family, as well as local residents, feared for their lives. At the end of 1856, the guardianship authorities ordered his guardian to commit him to a reformatory again[83]. At this time, Johann Jakob had already begun a relationship with Catherina Camenisch, a citizen of Chur. Since he was under guardianship, he had to obtain the consent of the authorities for a marriage. He did this at the beginning of 1857, at which time his father was already ill. Johann Jakob now contested his father's will. He did not agree that the entire family property should pass to his wife and stepmother, Margaretha Zinsli-Köhl. He was of the opinion that the inheritance of his deceased mother, Elisabeth Margreth Mathis-Köhl, belonged to him alone.

The guardianship authority followed his argumentation, declared the will not legal and demanded an adjustment[83]. Negotiations followed, the father offered money and the rights to 2 vineyards. Finally, the will[79] was adjusted shortly before Sebastian's death. Johann Jakob was to receive the entire assets of his deceased mother. However, the assets were to be administered by his guardian Rascher. 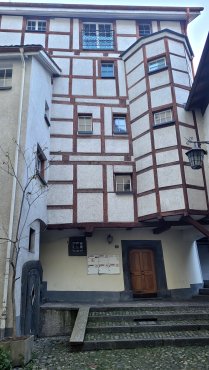 The house at Bärenloch 8, which was owned by the family until 1942 (photo archive Markus Köhl)

Anna Catherina pushed for a quick marriage, since she became pregnant by Johann Jacob in February 1857. However, he did not seem to be very willing: He later stated that before the marriage she and her brother-in-law Camenisch had locked him up and beaten him[84].

The two had 4 children in spite of start-up difficulties:

Shortly after his first daughter, Margareth Anna Catherina, died of encephalitis, Johann Jakob seems to have problems again. The guardianship authority clarifies whether he can be committed to the asylum in Kappel or Kalchrain[83]. Shortly before his committal, his wife became pregnant again. With the inheritance, the family bought the house at Bärloch 8 in 1864. They lived in this historic old building at Bärenloch for many years, but it seems that Johann Jakob had to be institutionalized again and again.

In 1865, Johann Jakob was now 40 years old, another son, Jacob Georg was born. Johann Jacob spent most of his time in the asylum at Kappel, occasionally getting leave to visit his family thanks to good behavior. His wife probably raised the children mostly without their father and was not dependent on poor relief thanks to the inherited fortune. Anna Catharina died unexpectedly in 1878 on her journey from Scharans to Chur, where she wanted to visit her doctor. Georg Jakob (13) was still a minor and probably lived with his mother. Nothing is known about Sixt Sebastian (20). Margreth Anna Catharina (17) may also have lived with her mother.

At some point the assets may have been exhausted. In 1895, Johann Jakob was now 70 years old, he was admitted to the citizens' asylum by the poor commission of the city of Chur. But even there he attracted negative attention. In 1899, the authorities complained: "With reference to various excesses in alcohol consumption on the part of some inmates, namely Johann Jakob Köhl, the administration is instructed to find measures to effectively counteract them. In the event of a repetition of such incidents, Köhl's reeve is to be offered the prospect of being logged out"[85]. At that time, he already seemed to suffer from dementia and was admitted to the clinic in the Waldhaus shortly after this incident.

Whether it was his lack of mother's love, his strict father, or his affluence that led him down this path in life, we do not know. But his decisions and actions brought great suffering to his family, especially to his children. Johann Jakob died in 1905 at the age of 80, lonely and alone in the citizens' asylum of Chur.

The children of Johann Jakob

After the death of his mother, Jacob Georg, just 14 years old, emigrated to America. At first he worked as a farmhand, but then wanted to buy land in Kansas with a loan on his father's fortune. With another loan he invested in building a resort called Diamond Mineral Springs in Grantfork Illinois. When the money ran out and he also impregnated his fiancée Dora Elisa Bardill, the daughter of the owner Stephen Bardill, he returned to Switzerland and asked for another loan. This, however, was denied him. He was medium and unemployed. The authorities bought him a ticket and made sure he made the trip to the USA. Back in the USA his son Melville Arthur Bardill was born. However, there was no marriage, the child was legitimate but bore the name Bardill. Later Jacob Georg worked in Chicago as a machinist and engineer. In 1889 he married a Madeleine from Germany and had a son with her, George Jacob Koehl Jr. who was born in Ohio. His wife appears to have died or there was a divorce. In 1905, in any case, he married a Marie Julia Hodny, with whom he remained in San Diego until his death in 1943.

George Jacob Koehl, Jr. married an Edith Angela Lyttle in 1915 and served in World War I shortly thereafter. No children appear to have resulted from this marriage, and he separated from his wife again in 1920. He later lived with his parents and went off to serve in World War II in 1942. He also survived this war and died in San Diego in 1968 at the age of 78, with no descendants.

Margreth Anna Catharina (Nina) married Jakob Kratzer of Scharans in 1881 and had 2 daughters with him. Elisa Mathilde Kratzer , the older daughter, was mentally impaired and was institutionalized. Shortly thereafter, Nina fell ill with a nervous disease, suffered great pain and had to go regularly to the spa. With loans on her father's fortune, her husband Jakob opened a trading business in Chiavenna with partners. In 1890, another daughter, Katharina Kratzer, joined the business. Her husband's business failed shortly thereafter, and in addition to health problems, financial worries were now added to the mix. The desperate Jakob Kratzer threw himself into the Silsersee in 1895 and died[88]. He was buried in the cemetery in Sils in the absence of his wife. The couple may have separated before. The widow then worked in Zurich as a housekeeper and opened a grocery store. But she fell seriously ill again and lived on her father's fortune until her death. Both daughters died unmarried and were buried in the Daleu Cemetery in Chur: 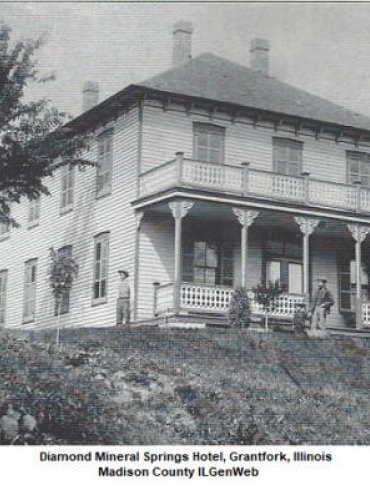 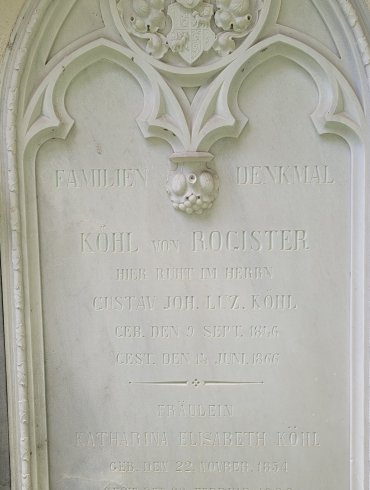 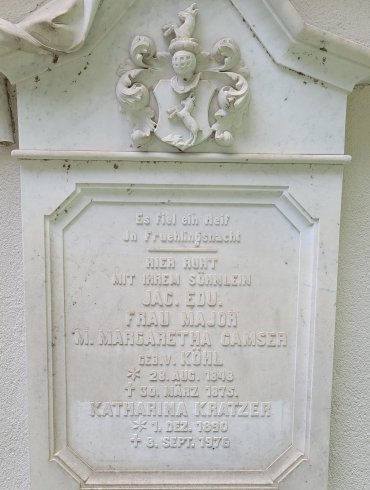