Johannes Bruesch was born at Hinterwalde Hof in Jenins, the first son of Johannes and Anna Bruesch-Köhl. He also spent his childhood there together with his 4 siblings. Johannes learned the profession of a butcher and also worked on the farm of his parents. In 1842 his grandfather Simeon Köhl moved to Jenins and was cared for by Johannes' mother Anna until his death in 1845. In the same year he married Margaretha Niggli, daughter of Jacob Niggli and Anna Nutt, who had grown up in Malans, in Zizers

Their first son John was born shortly after the marriage, was a premature birth and was baptized right in the house. The baby died 2 days after birth. The next children Johann Jacob and Anna were born in Jenins, but daughter Margaret was born in Chur in 1850. The couple may have lived in Chur at that time. After that they lived in Jenins. There 2 more daughters were born. Johann Jacob seems to have lived with his grandparents in Chur for some time (1853-1854). Son Simeon was born in Jenins in 1855, but baptized by brother Christian Bruesch in Chur.  Johannes, however, may have lived most of the time in Jenins and taken over the farm of his father.

1 year later Johannes sold the Hinterwalde farm in Jenins. These were difficult economic times in Chur. So the family decided to emigrate to America and look for a new future there. In the meantime, his son Johann Jacob had completed his apprenticeship and worked as a baker in Anglikon near Bremgarten. 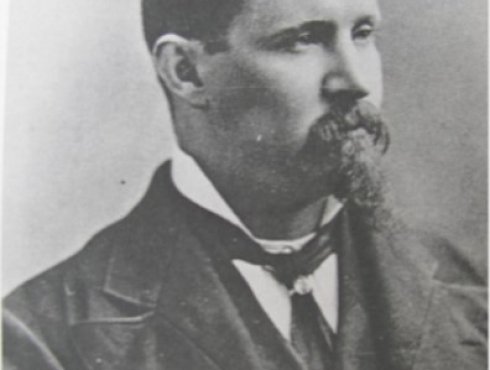 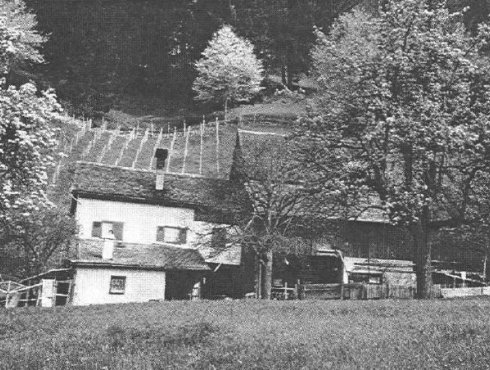 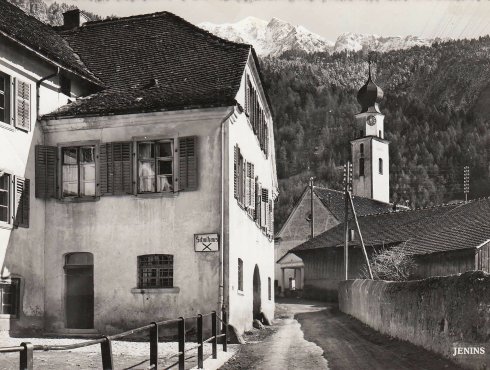 Johannes deregistered in Chur in 1864 and probably then emigrated to the USA. His son Johann Jacob and his brother Peter followed him 2 years later. His wife and the other children remained in Switzerland. Presumably they did not want to take the school-age children out of school; on the other hand, his wife may already have had stomach cancer and suffered from the symptoms.

In 1869 Johann Jacob returned to Chur for 2 months and seemed to be preparing everything for the departure of his siblings. His grandmother Anna Köhl-Bruesch had already fallen ill and she was able to say goodbye to her grandson one last time. His wife's health had deteriorated so much that the strenuous journey to America was out of the question for Margaretha. So Margaretha had to say goodbye to her family and Anna (23), Margaret (20), Maria Barbara (18) and Simeon (16) also left Switzerland and arrived on board the SS Leipzig in Baltimore on May 26, 1871. Johannes, son Johann Jacob and his brother Peter had already settled in Staunton, Virgina. Daughter Anna was to die of smallpox the same year of her arrival in the United States. His wife Margaretha was cared for by her relatives in Malans, where she would die of stomach cancer a year later. Part of the family then also resided in Gordonsville.

Johannes worked in Staunton as a butcher, presumably together with his son Johann Jakob, who probably also lived with him. Margaretha Niggli had died in Switzerland in the meantime, and so Johannes married Sallicie C Braden (*1848), 23 years younger, born in Augusta, Virginia, in Alexandria (Baltimore) in 1873. His son also married Hannah Belle Johnson, age 17, in Gordensville. The following year, 1874, John traveled to Florida by covered wagon with his wife and son Johann Jacob and his wife and firstborn. They worked as butchers, but Florida did not seem to offer much. So they decided to move on by wagon, to Texas. On the way there, Johann Jacob traded horses. They settled in Gainsville and probably Forth Worth (Tarrant). Since the business with the horse trade went well, Johannes and Johann Jacob entered this speculative business on a larger scale.

In 1880, mining in southwestern New Mexico was experiencing a considerable boom, enhanced by the railroad, which brought a long-sought means of transportation for minerals from the mountains around Silver City.

In 1878/79, daughter Anna had left Gordensville with her brother Simeon and traveled to Silver City in Grant, New Mexico. Traveling and living in this area was extremely dangerous at that time: Victoria, an Indian chief of the Apache tribe, and Geronimo caused a lot of trouble in New Mexico, attacking settlers and scalping their victims. Bandits like Billy the Kid were up to their tricks, robberies and shootings were not uncommon. The wagon trail of Anna and Simeon was also attacked by Indians and the two escaped only with a lot of luck. All other settlers were killed. They then stayed in Silver City and then bought a farm in Arenas Valley. While Anna's husband successfully built up the farm, Simeon returned to Texas to join his father and brother Johann Jacob.

Johannes and Simeon bought land and a farm near Jacksborwo where they raised and sold cattle and John also butchered as a butcher. Johann Jacob continued to live with his family in Gordensville, but may have been involved in the business as well.

In 1880, mining in southwestern New Mexico experienced a considerable boom, enhanced by the railroad, which brought a long-sought means of transportation for minerals from the mountains around Silver City.

In late 1878, Anna's husband received a commission from France to look after the wine growing areas in New Mexico. So Anna and her husband, along with her brother Simeon, left San Antonio. Travel was extremely dangerous in that area and time: Victorio, Indian chief of an Apache tribe and the notorious Geronimo caused a lot of trouble in New Mexico, attacking settlers and scalping their victims. Bandits like Billy the Kid or Butch Cassidy were up to their mischief, robberies and shootings were not uncommon.

Anna and Simeon joined a wagon train and drove in great heat through the steppe towards El Paso. There was a lack of water and the fear of attacks was great. After many days they reached the Rio Grande and El Paso. They drove along the river on the Butterfield Trail to Fort Thorne. Then they turned west across a rolling plain with nothing but waving grass and mesquite bushes. In the morning the sheriff of Las Cruces came with a posse of three and told the wagon master that there were Indians everywhere. The posse split up and some headed for Fort Cummings, 30 kilometers away. The Flury's packed their household goods and jewelry, which they had brought from Switzerland, into one of the ox wagons. Suddenly, Indians appeared in the distance. Their wagon was the last in the column and they immediately fled with their light wagon, leaving their belongings behind. The Indians now attacked the wagon train. After the Brueschs had traveled several miles toward the fort, some Indians broke away from the rest and gave chase to their wagon - it was a matter of life and death. One of the horses fell! They had to cut it loose and leave it behind. Their pursuers were getting closer and closer, an arrow hit one of the horses....

In the meantime the soldiers had seen the fugitives, opened the gates and let them into the fort. Their pursuers turned back... All the other settlers in the caravan were killed and everything was destroyed. Anna later, under the protection of the soldiers, found some old pictures and household utensils brought from Switzerland.

The family stayed at Fort Cummings for a while. When the next wagon train arrived, they left again. As they passed through Cookes Canyon, soldiers accompanied them. The mountains were high and the walls of the canyon ran steeply upward. The best place for an attack, as there had been several times before. After crossing the dreaded canyon, a wide valley opened up to them and they reached the Mowry City post on the Mimbres River. The next two or three days were spent crossing the desert and on to Silver City. Narrowly escaping with their lives, they now remained at Silver City.

Simeon returned to Texas in 1881 to join his father and brother Johann Jacob. Anna and her husband then bought a farm in the Arenas Valley. In Texas, John and Simeon bought land and a farm near Jacksborwo where they raised and sold cattle and John also butchered as a butcher. Johann Jacob continued to live with his family in Gordensville, but may have been involved in the business.

The adoption of Fred Mosley

John (60) had now been married to Sallicie C Braden (35) for 13 years. The two had no child together. So they decided to adopt Fred Mosley, born in November 1885. That same year, Simeon married and now moved with his wife to Denton, Texas, where their first child was born. Daughter Anna and her family had been living in Silver City for 7 years and by now owned the largest ranch in the area. Chief Geronimo surrendered in 1886 and the war with the Apaches was declared over. The area was now a lot safer, John and John Jacob decided to move to Silver City as well. They sold the farm in Jacksborwo, left Texas after 9 years and traveled together by covered wagon to Silver City.

Johannes and Johann Jacob worked as butchers in Silver City, selling meat to hungry miners. A year later, Johannes and Johann Jacob moved to Central, a village right next to Silver City. There, farm land was still affordable. Johann Jacob bought a ranch just a few miles from Fort Bayard, an army post established to protect people in that part of the country. The ranch may have been located very close to the ranch of Anna and her husband Christian Flury. So the two began raising cattle themselves, which they could then slaughter and sell. Probably they worked closely together with Christian Flury.

Johann Jacob lived with his wife Hanna Belle and by now 8 children on his farm 1 kilometer outside of Central. Daughter Anna lived with her husband Christian Flury and 5 children on the Flury Ranch, 4 kilometers west of Central. John probably lived on one of the two ranches, with his wife and their adopted son. Daughter Margaret was still living in Gordensville, Virginia, with her 3 children. Her husband had died in 1891 and her uncle Peter Bruesch was living in the same household. Simoen had since moved to Lexington, Oklahoma with his wife Louisa Caroline Goodman and 4 children. Johannes and Peter were now the last of the Bruesch children born in Jenins. In the meantime, all of their siblings had died in Switzerland.

After an eventful life away from his home, Johannes passed away in Central New Mexico at the age of 78. The Bruesch-Flury, Bruesch-Johnston families, his wife and Fred were likely with him in his final hours. Johannes was buried in the Santa Clara Cemetery in Central. A simple wooden stone (almost illegible) marked his grave until his great-granddaughter Juanita Franks replaced it with a beautiful headstone.

This story and others were traced in detail in the Bruesch Family Book 1682-1994 by Naomi Durfree Reed, a descendant of John.[89] 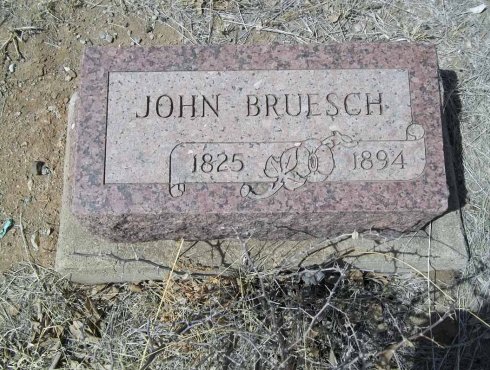 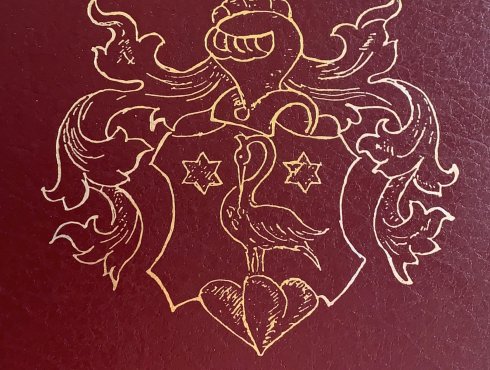