One of these tombstones is dedicated to the family of Mayor Bernhard Köhl. Besides him, the wife is "immortalized" in the stone, and the children are also listed.

So it says on this record: "I live in anticipation of death, to live through death. God, the greatest (and) best sacred. The noble man, famous for justice, prudence, dignity and skill in his deeds, father of the fatherland, the excellent Mr. Bernhard Köhl, once appointed in 1677 as bailiff of the city of Chur, in 1681 chief judge (of a court of arbitration) of the three confederations, in 1689 elected head of the confederation of houses of God and mayor of the city (Chur), born in Chur in 1624 on June 2, died in 1700 on April 7. - His dearest wife Mrs. Gertrud Scheffknecht, born in 1624 in the month of April, snatched from this sad valley of misery in 1695 on March 27. - The sons: Peter, Armenvogt; Andreas, candidate of philosophy and medicine, died in 1682 in St. Gallen; Bernhard, V. D. M.; Joseph, doctor of philosophy and medicine; the daughters: Martha, Emeritha, Anna Maria, Sibilla, Elisabeth, Gertrud, Anna Catharina and the couple of the once deceased Bernhard and Gertrud. God save them all in His name, and joyful and happy be their resurrection to eternal life. Amen."[37] 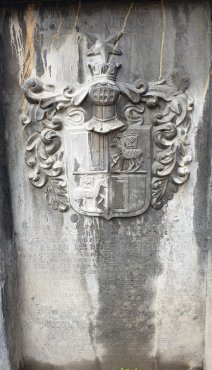 Another grave slab is dedicated to the father of Bernhard Köhl, Peter Köhl and his wife, Emerita Matis:

This slab mentions Bernhard Köhl's two children, Bernhard and Gertrud, who died in 1660. The gravestone itself was probably made in 1674/1675. 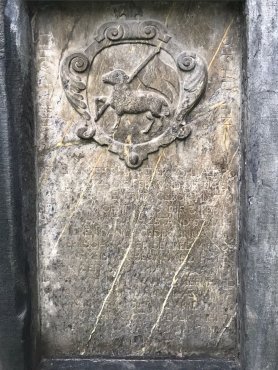 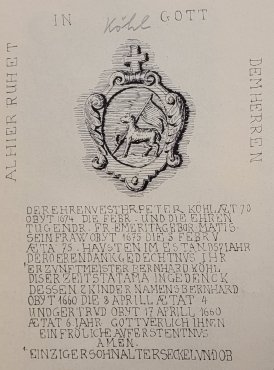 In the city garden there is another grave slab, which is dedicated to the Köhl-Hosang family.

Due to severe weathering, the content of the text could only be partially deciphered and assigned. It is not known which Elisabeth Köhl it is about and in which year the grave slab was made. Since the old family coat of arms of the Köhl was still used, the plate was certainly created before 1684.

The Hosang family of Mutten was naturalized in Chur in 1526. A Gregor Hosang, probably the son of the Fähndrich Hosang mentioned on the gravestone, was from 1676 repeatedly
guild master.[5] 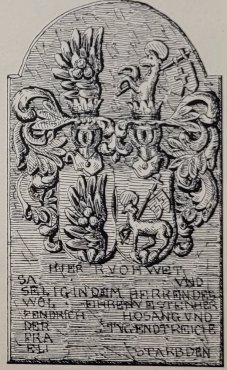 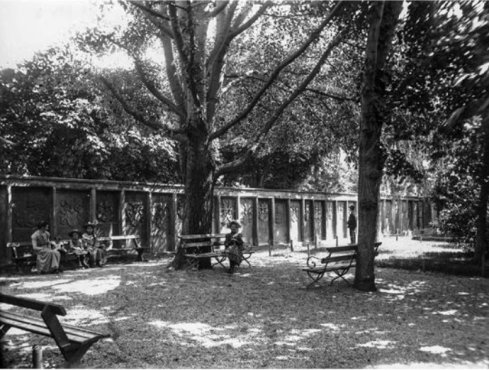