No other entries for children could be found. Also missing is information on Arnold and Anna. Bernhard Köhl does not mention any siblings in his will. Probably all of them had died before 1670. It could also be that these two as well as other siblings were carried off by the plague of 1629.

Peter Köhl joined the shoemakers guild in 1619[1]. From 1638 - if not earlier, until the beginning of 1648 the position of the gatekeeper of the Metzgtürli and lived with his family probably in the official residence of the Metzgmühle (today Arcas 1), located at the Metzgplatz.

1646 was an important year for Peter. His son married Gertrude Schafknecht, a citizen of Chur, when he was only 22 years old. He also bought his brother's apartment in the Prixinenhaus, located on the other side of the Metzgplatz, and put his family coat of arms there. Presumably he moved into this apartment with his wife and the newly married couple. He also gave up his position as gatekeeper. In 1648 the gatekeeper position at the Metzgertürli passed to the new Metzgmühle owner, a Hans Michel Apatzhuser, who had previously been gatekeeper at the Untertor.[9] In the same year his brother Joseph died, leaving his wife with several small children.

It could be that Peter took over his brother's business and therefore gave up his secure position as gatekeeper. Or he supported his son, who had a lucrative trade at St. Martin's Square. In 1668 Peter is again listed in the official records as the gatekeeper of the Oberthor.

Peter lived with his wife in the apartment on Prixinengasse until his death. His wife died, mourned by her son and his children, a year later. 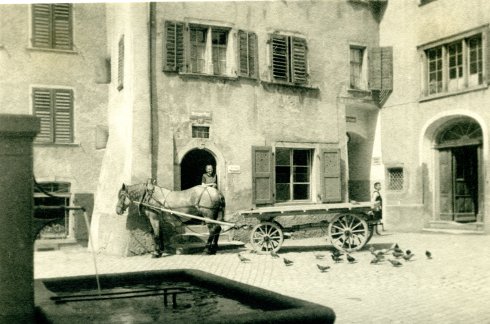